Goodness! How happy a coincidence is that – on a day celebrating THE radio drama show of shows – Orson Well’s War of the Worlds broadcast. Hard science crossed with heroes and monsters, all set within the worldly concerns of our everyday life experience – isn’t that what science fiction is all about?

The Nixi are a product of a brainstorming session at the Deloraine craft fair a year ago with some members of Deloraine nanomo write-in group – in a faerie shop no less.  All I had at the time was Adam’s brief to crash the Doc and her stowaway into a waterworld and my idea to bring some cutting edge hard science- the Electric universe, into two 15 min episodes. Brain cells supported by coffee and cake and good company came up with rat like race of scavengers who live on the desert world of Nix, and have a unique sound. They go “nixixixix ” They are bipedal man sized creatures insulated with thick scales that can also cover their eyes and ears when needed. Rather like certain knights who say ni! but lacking a shrubbery 🙂 Cue the coloured pencils and young Bridgette Ewings created Pelham the Brobrean seamonster  for us as the plotline started to unfurl like this – 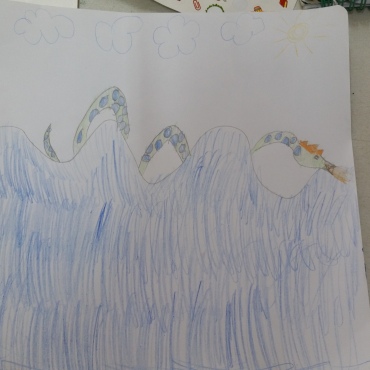 ( It sounds amazing btw his voice is also a whiteboard marker! see the credits below) 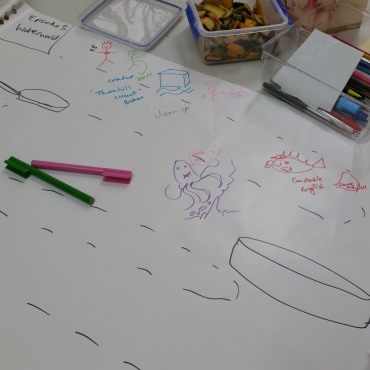 beginning middle …no end in sight..

( It sounds amazing btw his voice is also a whiteboard marker! see the credits below) Then just integrate huge tech info dump into the crayola somehow.

Wouldn’t it all be easier with a picture? image courtesy of Claire Stribbles Photography

No historical characters were harmed in the making of this play

Our producer was at first rather horrified at the disparagement of Einstein’s work – after all time travel, big bangs and blackholes abound in the fictional world of the Doctor. Luckily we don’t have to budge the ultra massive bulk of academia to shift science fiction plots to the next level and leave some of our old tropes behind -that’s the fun of writing near future hard scifi. The science of electrically structured water that is used by the Brobreans to build their Dome is real enough, as is the Birkeland Current, Safire  and Wallace Thornhill ( with his permission of course! ) – although he hasn’t invented a flux ‘capacitator’ ….. yet…… http://www.thespaceshow.com/show/16-aug-2016/broadcast-2759-wal-thornhill